At the Thirty-first General Council, held at Laurentian University, in Sudbury, in 1986, Moderator Bob Smith extended an apology on behalf of The United Church of Canada, to Indigenous peoples, in Canada in these words:

“Long before my people journeyed to this land, your people were here, and you received from your elders an understanding of creation, and of the mystery that surrounds us all that was deep, and rich and to be treasured. We did not hear you when you shared your vision.  In our zeal to tell you of the good news of Jesus Christ we were closed to the value of your spirituality. We confused western ways and culture with the depth and breadth and length and height of the gospel of Christ.  We imposed our civilization as a condition of accepting the Gospel.  We tried to make you like us and in so doing we helped to destroy the vision that made you what you were.   As a result you, and we, are poorer and the image of the Creator in us is twisted, blurred and we are not what we are meant by God to be.  We ask you to forgive us and to walk together with us in the spirit of Christ so that our peoples may be blessed and God’s creation healed.”

The Response to the Apology

The Indigenous peoples who were present at that General Council, waiting in a teepee beside a sacred fire, in parking lot #10, received the Apology, but did not accept it.  They said that they would consider the words of the Apology and make a statement at a later date. Two years later, at the 32nd General Council in Victoria, Edith Memnook, a representative of the All Native Circle Conference constituted at that meeting, responded to the 1986 Apology:

“The Apology made to the Native People of Canada by the United Church of Canada in Sudbury in August 1986 has been a very important step forward.  It is heartening to see that The United Church of Canada is a forerunner in making the Apology to Native People.  The All Native Circle Conference has now acknowledged your Apology. Our people have continued to affirm the teachings of the Native way of life.  Our spiritual teachings and values have taught us to uphold the Sacred Fire; to be guardians of Mother Earth, and strive to maintain harmony and peaceful coexistence with all peoples. We only ask of you to respect our Sacred Fire, the Creation, and to live in peaceful coexistence with us.  We recognize the hurts and feelings will continue amongst our people, but through partnership and walking hand in hand, the Indian spirit will eventually heal.  Through our love, understanding, and sincerity the brotherhood and sisterhood of unity, strength, and respect can be achieved. The Native People of The All Native Circle Conference hope and pray that the Apology is not symbolic but that these are the words of action and sincerity.  We appreciate the freedom for culture and religious expression.  In the new spirit the Apology has created, let us unite our hearts and minds in the wholeness of life that the Great Spirit has given us.”

The 25th Anniversary of the UCC Apology to First Nations Peoples 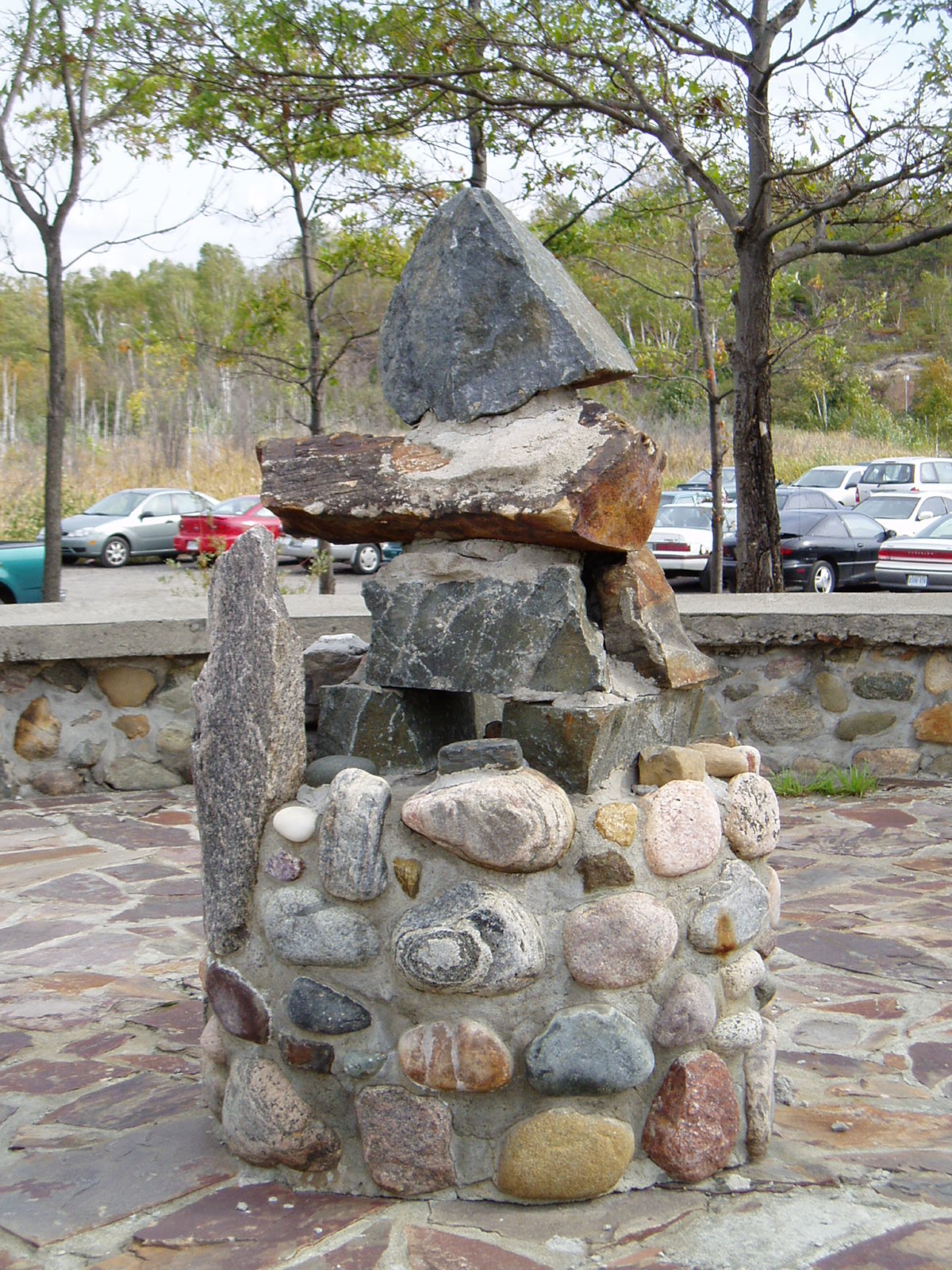 The Cairn at the site of the first official Apology made by the UCC to First Peoples in 1986.

At the same General Council where the Apology to First Nations was made in 1986, Presidents of all the Conferences had been asked to bring rocks from their home Conference, to be used as symbols in the opening worship and throughout the meeting of General Council.

Stewart Bell, then Executive Secretary of Manitou Conference, remembered the memorial cairns of his native Scotland and envisioned those rocks as a cairn. He brought his idea to the Business Committee, which then brought it to the General Council.  Approval was given to the suggestion that the rocks from the Conferences be built as a memorial cairn on the site where the Apology was delivered by the Moderator, to the First Nations Elders, who were waiting in a teepee beside a sacred fire, in parking lot #10.

Permission was sought and received from Laurentian University, for the construction of the cairn on the property.  Bell then sent out an appeal across Manitou conference for volunteers. Maxine McVey, Erik and Tina Hansen, Rev. Ross and Jean Leckie, Jim Van Exan and Charlie Martindale were among those who answered the call. Anishinabe Elder, Art Solomon, a stonemason, was recommended to help with the project.  He agreed and suggested the design, as well as providing direction for the work.  As Project Co-ordinator, Maxine Mcvey put in countless volunteer hours. A 25-foot round cement pad, surrounded by four walls and four entrances, formed the base.  Field stones used in the construction came from M’chigeeng First Nation and red flagstone came from Whitefish River First Nation.

The Cairn itself was constructed in the middle of the circle with the rocks, that had been brought from across Canada, to the 1986 General Council.  The circular shape represents the Circle of Life and the openings, east, south, west and north, represent the four directions. The mostly inexperienced volunteers learned such skills as spreading cement and placing and mortaring stones, under the direction of Art Solomon.

On October 1, 1988, the completed Cairn was dedicated in a ceremony, which was filmed and shown on the first Spirit Connection broadcast in October, 1988. There are two plaques at the site.  The first plaque, installed at the time of construction, was designed and paid for by the people of Whitefish River First Nation.  It tells the story of the red rock which was used for the floor of the cairn.  The second plaque briefly tells the story of the cairn and the meaning of the structure, in English, French and Anishinabemowin.

Maxine McVey and Tina Hansen were responsible for arranging the second plaque, including negotiating funding and appropriate wording.  The Administration and Property Committee of Sudbury Presbytery is charged with the responsibility “for the maintenance of the site, including any necessary repairs” (Sudbury Presbytery minutes April 6, 1994, p. 2808). Some years later at a gathering of the All Native Circle Conference, at Laurentian University, delegates brought stones from their areas, which were added to the Cairn.

The site is an important part of the history of the United Church of Canada and of the All Native Circle Conference. It is a constant reminder of the on-going work of Right Relations with First Nations Peoples and the need for the words of the Apology to be lived out.

These are some of the many events and celebrations that have taken place at the site of the Apology Cairn:

This information has been obtained from a background paper on The Cairn, by Rev J. Stewart Bell, October 27, 1994, person interviews with Stewart Bell, Maxine McVey and Tina Hansen, and Sudbury Star articles from 1987 and 1988.